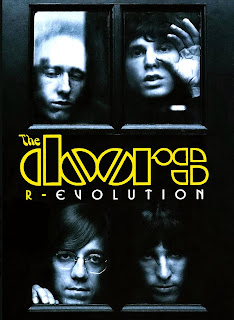 Now, whilst viewing, Gary suggests you pay particular attention to…

1.  The Doors as German (as in Astrid Kirchherr circa ’61-photographed) existentialist beat-group musicians, moodily half-lit and rockin’ in near darkness, for their delightfully low-budget “Break On Through” video from 1967. Nevertheless, making their television debut a mere eight weeks later, mimeing “live” to said song on Casey Kasem’s Shebang, J. Morrison seems so utterly stiff and scared he’d be fortunate to be taken for one of the Pre-fab, let alone actual Fab Four.

2.  The late, often great Ray Manzarek, chatting with a surprisingly respectful Dick Clark between numbers (“Crystal Ship” and “Light My Fire”) on American Bandstand, already has mastered down pat his trademark gobbledygook interview style. And I quote: “Well, it’s impossible really to put a label on it because of where we are in the music being on the inside, you’re only of the music, and all categories have to come from the outside so, someone else is going to have to say what our music is, rather than us, because we are our music.” Dick wisely shifts immediately over to John Densmore.

3.  Bringing things considerably back down to earth, The Doors – well, three of them (Robby’s brother Ron had to fill in for an AWOL Morrison for most of the footage) – climb aboard a beach blanket bikini-festooned antique fire engine for a Malibu U performance of, yes, “Light My Fire” which is absolutely one of the most ingenious clips this side of the Bonzos’ “Canyons Of Your Mind.” Most unfortunately though, Malibu dean Rick(y) Nelson’s post-song commentary is also absent.

4.  As the camera pans semi-cinematically off a still-not-ready-for-prime-time Doors, unwanted down the uneven streets of Battery Park for a Murray the K (!) lip-sync of “People Are Strange,” we are suddenly confronted with an above-motley collection of pantyhose-headed characters direct from Beefheart’s Strictly Personal inner gatefold. Why these exact bystanders weren’t utilized further for the Strange Days cover shoot is a question for the ages …or at least for Elektra Records’ art department. (I guess no one remembered their names?)

5.  “Now I don’t want anybody to come unglued, but it’s GANGBUSTERS time!” So enthuses none other than Jonathan Winters as he welcomes The Doors, and “Moonlight Drive,” to guest on the Christmastime 1967 debut of his CBS Television variety show extravaganza. Far from surprisingly though, even the dry ice-clouded, sub-Star Trek …no, make that Lost in Space set, not to mention Jimbo’s quite ill-advised choice of John Kay-style Ray-Bans, can’t hope to compete with the ultimate born-to-be-wildness of Maude Frickert et al (…who, according to Messrs. Krieger and Densmore’s R-Evolution commentary track, kept the entire proceedings in stitches that whole day, even after the studio audience had long returned home to their leftover turkey and cranberries).

6.  We are next whisked from the sublime to the ham-fisted for the band’s own “visceral film” …as in a friend with a 16mm spending $5,000 of Elektra’s money on the beach one afternoon to shoot, literally, “The Unknown Soldier.” They say it was the anti-war, extreme social commentary which scared even Canadian television from airing this naughty short subject back in the day. Personally, I think it had more to do with the sight of a dirty-jacketed Morrison being tied, Christ-like (by Ray’s girlfriend) (with a handful of colored twine) to some rotting old dock support, then vomiting up what appears to be a mix of cherry Jell-O and tomato juice over some strategically placed roses as he’s symbolically (?) executed. Or crucified. Or something. No wonder half of this band never made it out of UCLA Film School alive.

7.  Come Christmas of ’68, the Smothers Brothers – now there’s entertainers who know how to protest the Vietnam war on television! – present a festive, fully orchestrated “Touch Me,” complete with Nelson Riddle’s Orchestra and completely wailing sax solo by Curtis Amy. Jim has by now wisely left all Bigger-Than-Jesus aspirations behind and donned his iconic black leather pants and Elvis belt, with golden microphone and maracas to boot. But that’s not all! R-Evolution finally reveals the source, perhaps, of Robby’s great big shiner, which I admit has always intrigued me about this clip: John claims Robby was actually the victim of an en-route-to-Smothers car accident. No, wait! Maybe it was an altercation with some backstage, training-for-Altamont Hells Angel that caused the flaming black eye? Alright, John can’t remember. Robby has on other occasions put the cause a bit, uh, closer to home. Tommy and Dickie Smothers aren’t talking …and, for once, neither is Ray either.

8.  The more than obvious change – and not for the good – between the vividly hued recording studio footage of “Wild Child” (July 1969) and the drudgingly monochrome’d rehearsal footage of “Crawling King Snake” (just seventeen months later) shockingly demonstrates just how soft this band’s particular parade had become as Sixties turned Seventies, and pop/rock’s intelligentsia had duly moved on to all things Wishbone Ash and King Crimson. The “Wild Child” shoot, which almost managed to completely hide all signs of bassist Doug Lubahn, shows four enthused musicians a bit crusty, but still completely confident and supremely creative. On much the other hand however, even the most catatonic Let It Be footage of those Beatles, for instance, can be tons more fun to watch than the 1970 Doors (bassist du jour? no less than Jerry “TCB” Scheff, completely hidden) desperately trying to fulfill duties to label and lawyers before calling it a wrap as Jim escapes, permanently it turns out, to the other side.

9.  Of course the post-Morrison Doors never were much to listen to, and despite all the MTV-era technological advances still aren’t much to watch either. Wholly late-night-cable caliber clips of “Gloria” (lotsa teasingly blood-red-nailed, slo-mo back-and-belt-scratching), “Strange Days” (featuring a boom-box-totin’ cameo by R. Manzarek) (not to mention cardboard cut-out Morrisons galore, I kid you not), “L.A. Woman” (wherein director Ray hires protégé John Doe to attempt his best John Densmore impersonation over Josef von Sternberg’s Hollywood Star) and “Ghost Song” (surviving Doors “re-unite” with their old singer via the wonders of nascent digital video and, as Robby still tries to explain it, extremely posthumous “poetry and jazz, kinda” from the American Prayer, um, album). You mean there wasn’t enough space left in this collection for more Malibu U out-takes ?!!

10.  Which reminds me: Pay real close attention especially to the Bonus feature Love Thy Customer, a miraculous half-hour 1966 Ford Motor Marketing Institute training film with music by a moonlighting Ray Manzarek and Robby Krieger. This is a band who may have once turned down the chance to license “Come on, Buick, Light My Fire” for commercial use, but it seems, on quite the sly, they cashed all the way in corporately nevertheless. A trend which, apparently, they continue to embrace to this very day …if the Official Cyber Doors Store with its “high-quality light-weight terry-lined hoodies with distressed Doors logo,” “Ladies’ Hello I Love You T-shirt,” “Doors Logo Beer Glass” or “Dusters California Doors Skateboard Collection” is of any indication whatsoever.
Posted by Roctober Productions at 8:00 AM