Kip Addotta "The Comedian of the United States" 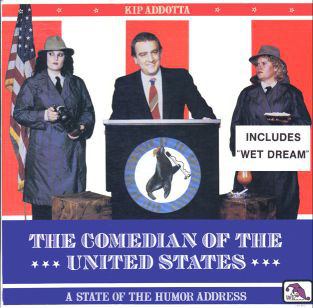 (Laff, 1985) Not as funny as the first LP, but way more ambitious, with short stand up snippets between songs. An opening bit about being the President of comedy went nowhere, but tried. While most of the songs go nowhere, somehow a gloriously lame, but wonderfully enjoyable, series of awkward fish puns became a Dr. Demento crossover mainstream classic, "Wet Dream." It was a cod-damn hit! His white guy rap song could be worse (see Jim Belushi), he does not try to use AAVE or jive talk and it is not offensive. And not funny.

Posted by Roctober Productions at 10:57 AM