NRBQ "We Travel the Spaceways" 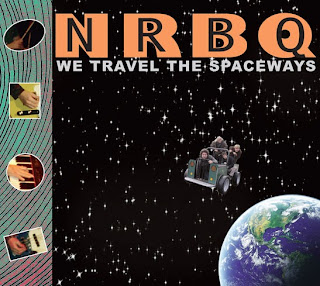 (Clang) With the upcoming Replacements reunion I'm reminded of one of the most memorable concerts I've ever been to. It was a huge 4th of July concert in Grant Park, that culminated with the Replacements last show. They were sloppy, fed up, and full of disdain for each other, and to some degree, the audience, and were ready to call it a day. Opening were Material Issue, who likely had never played for tens of thousands before and were full of the optimism and energy of a band that believed they were on the rise (that optimism, sadly would not last). And in the middle were the ultimate winners of the Battle of the Bands, NRBQ, who gave a tremendous, thrilling, timeless performance that defied their decades of existence with youthful exuberance. it was neither about burying the past like the headliners nor looking towards the future like the openers. It was about the right now, and even as the current Terry-centric NNRBQ (doubling the "New" up) they maintain that energy and magic, as this CD makes clear. It includes some joyous banter and live silliness, a guest appearance by the since departed Tom Ardolino, and some playful, swinging, stellar songs. Though the covers are killer, including the Sun Ra title track made fresh here, and there are some catalogue favorites featured, what's better is the new material with input from Chicago import Scott Ligon that make the NNRBQ seem like an kickstarted, even newer band (the NNNRBQ!).

Posted by Roctober Productions at 3:24 PM