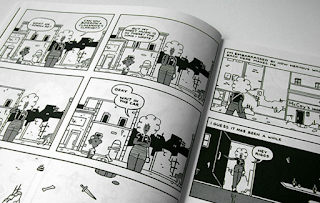 (Koyama/D&Q) I am still not sure whether or not the prolific DeForge is the premiere comix artist of this era. That’s because despite his sophisticated, unusual, engaging storytelling techniques, his ideas, asides, details, drawings, concepts and execution are all just so gloriously fucking weird that it’s hard to place his progressions of the art form into an historical or a cultural context. When Dan Clowes hit his stride it became clear that comics had caught up to, and in some ways surpassed, the day’s acknowledged best short story writing, with Eightball often making the New Yorker’s selections seem pedestrian. But it is very hard to imagine a mainstream, occasional reader of comics getting past DeForge’s casual deviance, sublime visual abstractions, emotionless devastation, and did I mention fucking weirdness. It may be a King of the tiniest kingdom. That said, his progression as an artist is steady and sure, as made clear by reading A Body Beneath (a collection of earlier issues of his annual anthology comic Lose, skipping the first issue out of shame (if you need proof he is an unusual comics artist look no further than the non-completist nature of this non-omnibus) alongside the 2014 and 2015 issues. Everything in ABB is solid, but Lose #6’s tale of a cool aunt’s triumphant descent into the violent underworld in pursuit of a niece’s sheet music may be the best thing he’s ever done. Despite what should be a macho narrative, I actually got so engrossed I not only lost track of the authorship, I felt it was a woman’s creation. A story in #7, about a found blu-ray’s miraculous/disastrous effects, is also mesmerizing. The anthology Dressing explores identity, technology, erectile malfunction and fish rudeness through a kaleidoscope of visual candy made more impressive by the high end production and color printing this fine work now affords. And the semi-mystical, sometimes violent, keep-away-from-children fable in First Year Healthy is satisfyingly unnerving. Overall it’s clear that this visionary is taking comics somewhere new and better. It is just unclear how many readers will be willing to visit that place. I hope a lot, because this strangeness needs to be printed as fast as it gets produced.

Posted by Roctober Productions at 11:43 AM