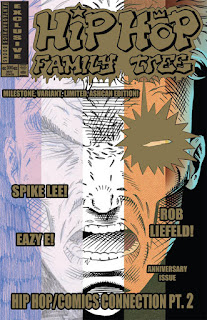 (Fantagraphics) As a bonus in his box set of the first two treasury compilations, Piskor included a tribute to the Rob Liefeld-era of truly terrible comics but having fun but not making fun of the Image “revolution.” While the foil cover (and a promise of variants) and the fancy printing are period-correct in a way that parodies as much as pays tribute, the comic, which tells of Liefeld’s rise, and his dealings Spike Lee and Eazy E, is relatively reverent. There’s a conceit of this being a lost comic by a lost artist but the real theme here is that Rob is as historical as any of the obscure Brooklynites championed in early HHFT comics, and more importantly, is redeemable, despite his crimes against anatomy. Piskor’s work is all about positivity and celebration, which consistently makes something that should be extremely niche extremely universal.
Posted by Roctober Productions at 5:52 AM