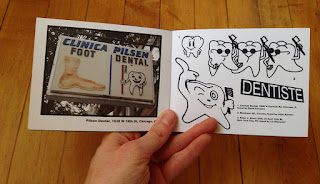 ( lilbuddies.tumblr.com) Fake must tire at times of hearing the word “brilliant” associated with his drawings and comics so frequently, so maybe this simple, dumb, foray into cataloguing  anthropomorphic inanimate objects was an attempt to present something lighter and sillier, but I’m going to b-bomb Edie once again…BRILLIANT!!! Issue one is photos of mostly food items but also clothes, tires, locks, refrigerators and other awkwardly enlivened items with eyes and smiles added to them by mostly amateur artists, mostly for hand painted signs outside or inside of independent urban businesses, making their grocery stores, taquerias, and muffler shops playgrounds for somewhat disturbing cartoon creatures. And it’s a good move on these merchants behalves, as the flirty dress, nervous union suit, and lascivious wet blankets at Fun Wash, on 22nd and Western, guarantee that joint is aptly named. More focused is issue two, or “issue tooth,” which just has scores of smiling teeth from dentistry practices across the land, some 3-D, some neon, some slickly rendered, and some so anatomically astray I wouldn’t let anyone who thought that was what a tooth looks like anywhere near my mouth. Both books are whimsical forays into functional outsider art, and whomever put these things together, if you don’t mind hearing the “G” word for what may be the millionth time, is a fucking genius.
Posted by Roctober Productions at 5:58 AM