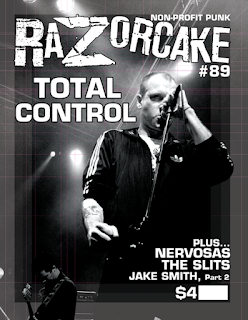 (razorcake.org) While our magazine has been on a lazy hiatus, Razorcake has been cranking out the woodpulp, with thick issues arriving like menstrual pains (if one ovulates every 60 days die to some biological bizarre-ity). Issue #79 opens with an oddity: the editors gripe about not getting much love from Academia for their oral histories and documentation of early L.A. punk. The underground has always documented itself better than the mainstream or the academy, and eventually if your zines or radio shows or liner notes or show videos are archived somewhere then in the future an academic or VH1 documentary maker or future Dave Grohl will find it and use it, but the expectation of instant gratification via academic accolades seems to be a weird thing to get worked up about. It reminds me of the Behind the Music Green Day episode where they had to first contextualize selling out to a mainstream audience and then frame accusations of selling out as the tragic dramatic twist because there was no betrayal/accident/addiction/incident available that their fall-from-grace/redemption story arc template needed. If you ain’t got nothing to complain about, it’s OK not to complain. But then again, if you need to because it fuels your punk-spirit fire, go for it. And the fact that the gripe frames an Alice Bag-centric oral history of East L.A. early punk is awesome. In fact, skip to a year and a half later and you get a great Slits piece, and in between there are features on the Urinals, Real Kids, Wayne Kramer, M.O.T.O. and tons of new bands. There are also punk takes on everything from poetry to pinball to the trans scene within the scene. And the consistency over the years has been amazing, with regular comics from some of the bright lights in the scene, regular columns by faves like Rev. Norb, and some solid editorial direction. That said, it is impossible in the Internet age for a print zine, or really anything, to have the kind of specific identity, national presence, and cultural reverberations of MRR or Flipside in the days when punk was so marginalized that every punk band in existence advertised or was reviewed in their pages (or at least aspired to) and every small town punk anywhere relied on these mags for info. Doing the same kind of work with less of the respect certainly must be frustrating, but at least they get to experience some marginalization in the post-Hot Topic era.
Posted by Roctober Productions at 2:34 AM