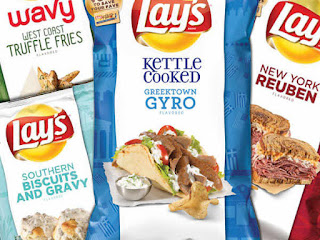 (Fritolay.com) I don’t know why I continue to get excited every year when Lays introduces four new, limited-run, civilian-suggested unusual flavored potato chip. Despite the intriguing high concepts, in the end the endeavor always ends up making a convincing argument that there’s a good reason there’s only a few viable actual potato chip* flavors. While there is no nauseating outlier this year (as was the case with last year’s cappacino-inspired chip), nothing here comes close to the pleasures of “plain.” Perhaps my palate is pathetic, but in general I am not tasting flavor profiles that match the ambitious concepts. The New York Reuben, while probably the second best offering, really just tastes like sauerkraut, which sort of hints at the pickled properties of corned beef, but not the actual flavor of it. I guess there’s some reference to the white gravy, though not the buttery biscuit, in the Southern Biscuits and Gravy (this was the “winner,” btw, for what it’s worth). The Greektown Gyro, which is probably the best one this year, makes a recognizable reference to tzatziki sauce, but doesn’t hint at the complexity/blue collar straightforwardness of the processed lamb flavor (though the kettle style makes them fun to eat). I guess I don’t know enough about what truffle fries are supposed to taste like, but the cheesy and spicy (dill? Muscular parsley?) dusting makes this taste the most like an existing flavor, which makes it the least interesting, but likely the most palatable to most (though the wavy style is pretty moot when one considers these are too strongly flavored to really dip into dip). Overall, I will not be buying another bag of any of these. But I look forward to next year, when I predict they ditch the savory and choose breakfast cereal, doughnut and liqueur flavors.
*we will leave Pringles out of this argument for obvious faux-chip-ish reasons
Posted by Roctober Productions at 2:28 AM