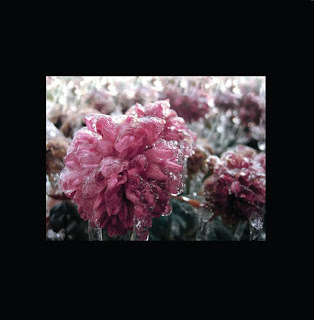 GUEST REVIEW by ARVO ZYLO (Ownness) A man coughs out ashes, sits up in a pile of rubble and decay, covered in dust.  The sun is still shining, and flowers still bloom, but nobody is around.   As if he had amnesia, he finds a strangely familiar instrument and starts to play it.  This is what Rory Hinchey's “Shape Is Nature” sounds like: Detached and off-kilter alien folk arrangements slowed down and stripped of absolutely everything but the essence, the impression of whatever innate instinct is there that one has to make music without conventions or pretension.
Just about every new genre to come since grunge has seemed silly and feigned to me; an artificial construct for a time buried in smoldering debris.  Throughout musical history, minimalist composers and rock bands just the same have attempted to strip down music or sound to its most intrinsically raw elements, but rarely does it have the vigor of something that was made within the context of its time out of bare necessity; irrespective of the concept of marketing angles or conceptual art; hardly ever has it happened within my radar along the last 5-10 years especially.  Suicide, Einsturzende Neubauten, The Ramones, Sigue Sigue Sputnik, Lungfish, Cromagnon, Giusto Pio, Satie, Ligeti, among others, seemed to do this in a time where it was imperative.  In other cases I think that people over-analyzed or missed the point.
Throughout the side of Hinchey's split with The Collection of The Late Howell Bend (which he plays on and does all of the arrangements in addition to this side), you mainly hear slow organ, although I'm tempted to say it is a harmonium in there, or a “pump-organ” as others have been calling it, augmented by carefully nuanced electronics throughout, and guest violin on a couple of tracks.   Rather than choruses or refrains, one idea builds and retracts, weaving through the stereo spectrum; Generally, what comes across is a sort of morose, yet vibrant feel, not necessarily optimistic or pessimistic.  The recording has every indication to the vibe of a guy sitting at a pier with a harmonica, while also having all of the accoutrements for the soundtrack to a sophisticated, heady horror film.  At other times, it encapsulates all the makings of a person at a fork in the road; the excitement of a new possibility, the despair for what is left behind, the fear and exhilaration.
The cover for this split LP has a photograph of a flower covered in what looks like a clear, thick gelatinous goo. It makes me wonder if there is some kind of Fibonacci reference in there about its symmetry.  Either way, “Shape Is Nature” seems to come from the gut, tremors under the skin.  It might have come from the artist in 1966 the same way it does now, regardless of outside ephemera, but it is without question a piece of work that was made for its time.   My only qualm is that it wasn't cut at 45RPM so that I could slow it down even more if I wanted to.
Side B, “Long Fields” by The Collection of the Late Howell Bend, finds Hinchey rejoined by Allison Corbett, the violinist on Side A, arranging works for piano by Irene Moon.  For those that don't know, Irene Moon is probably best known for her reputation as an entomologist obsessed with the nature of insects, who has toured extensively doing projected power point presentations about the endearing qualities of exotic bugs over layers of dissonant, screwed up loops from Ferrante & Teicher records and electronic noise.  This side is all instrumental, and piano gallops along with violin and organ, it makes for a good contrast to the 11 inch record also on Rory's Ownness label, which sounds like Ruth White/Louise Huebner mannerisms with brooding organ stabs and dark vocal harmonies.  “Long Fields” is also excellent, perhaps a rebuilding process to where “Shape Is Nature” leaves it.
Posted by Roctober Productions at 10:54 PM