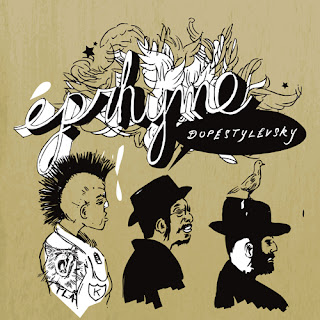 (K) This is definitely better than Ephryme's last record, but necessarily more interesting. It used to be when he would rap fast he'd lose his way, and sound like a high school kid doing his best, and now his vocal dexterity is on point. However, I actually liked that patina of amateurishness, now he's got that kind of Frontalot nerdcore thing going on where he's being cerebral and avoiding tough guy ebonics, but he still sounds like he thinks he's too cool for shul. I also certainly appreciate that the tracks are denser, tighter and better, but last time he was using all these klezmer musical cues and I'm not hearing that here. Not that I need Brooklyn Hassidic rappers to be Brooklyn Hassidic from sunup to sundown, but one of my fave things about my days in BK was seeing Orthodox teenage kids with their black hats cocked ace-deuce, knowing full well that they qualify as Brooklyn hipsters despite keeping it Kosher. Not that Eprhyme abandons any ethics or beliefs (this is fully righteous) and he never denies his heritage (destroyed temple metaphors abound and he gets gangster by boasting, "I go from polishing jewels to demolishing crews"). It's just that I guess I prefer weirder records that are worse than badass records that are better. great cover art, btw!

Posted by Roctober Productions at 11:37 AM