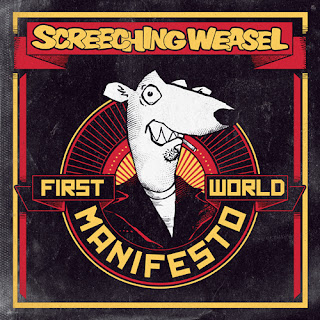 (Fat) Watching local Weasel worshippers wring their hands over Ben's recent bad behavior may be the most absurd thing I've seen in decades of seeing intense Chicago punk absurdity. Obviously hitting girls in public is not a good career move, but Weasel (I suppose by his own admission if you consider his chosen punk surname) isn't supposed to be Mr. Nice Guy. He has never been a pleasant presence, his music has always been kind of soulless and cookie cutter, and the look he has in his eyes always conveyed a kind of coldness that  felt like it went against punk community standards (just like Charlie Sheen's cold, beady eyes go against comedy standards). Thus, I am not questioning Screeching Weasel fans for turning on their hero, I'm questioning them for being Screeching Weasel fans. That aside, there are certainly a couple songs on this that remaining SW followers would dig, especially "Fortune Cookie" and "Frankengirl." But there are some things, like the opening track where the never-youthful Weasel sings in his jaded nasal affectation, "don't grow up," that, even if he's knowingly criticizing himself and the scene, are just hard to take.

Posted by Roctober Productions at 7:35 AM