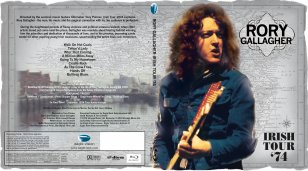 (Eagle Vision) While it is hard for me to steer anyone away from the awesome double LP format, I am going to recommend you get this concert as a DVD, as the movie is genuinely remarkable. Filmed so cleanly and intimately that it almost seems fake (how can the shots be that good?) this captures the Irish blues rocker at his best. Seeing someone so young and babyfaced (he's about 25 in this, but looks 15...it's hard to believe he could even grow those muttonchop sideburns) being able to play so well is just ridiculous. Opening with a blazing instrumental ("Walk on Hot Coals"), the filmmaker (Tony Palmer, I assume the same cat who did the All You Need is Love series and 200 Motels) captures the joyful pride, playful energy, intense deciation, and grooving fun that Gallagher had on stage. But he also gets shots of the crowd, particularly one enraptured teenage girl, whispering "Rory" as she stands stunned by the presence of her beautiful musical hero, in a way that profoundly captures the dynamic between performer and crowd. Every great concert rockumentary trick is played perfectly: the dramatically lit shot from behind, a la Monterrey Pop, closeups on hands on keyboards and strings, crazy perspective angles down guitar necks, low angles during solos, it is all on the money! And that you can count the pimples on the concertgoers, that you see Rory's orgasmic solo face as if the camera is inches away from the guitarist without him being conscious of it, and that they don't explain why a bandmember powders his feet for 10 minutes backstage before the show are all gravy! Ultra highly recommended!

Posted by Roctober Productions at 10:38 AM