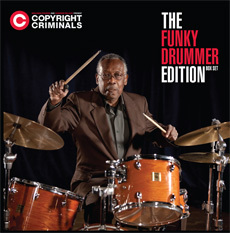 (Copyright Criminals) Because the producers of this documentary about defying copyrights can’t quarrel with anyone downloading their movie for free it makes sense that they would package it in an edition so deluxe that you are paying for the artifact, not the intellectual property. And this is deluxe. In addition to a 2-disc DVD edition of the movie there is a 12” EP of Clyde Stubblefield, the oft-sampled James Brown funky drummer, playing some live, original funky beats to use for your remixes, and there’s a hefty set of baseball cards of the rappers and remixers and deejays and intellectuals interviewed in the film, and  there’s stickers, and there’s a big, glossy movie poster. Since everything but the DVD and record kinda speak for themselves, let me address those. As seen on PBS, Copyright Criminals is very impressive for what it is. It’s a love-letter to the golden age of sample-based hip hop, and most of the documentary examines the cultural weight, artistic merits, and legal issues involving the brilliant De La Soul, Public Enemy and Beastie Boys records that are both beloved today and impossible to make today because of the sample clearance issues that emerged in their wake. By hooking up with some brilliant copyright defiant video remixers (Eclectic Method) these filmmakers are able to have some stunning visual and audio collages punctuate their points and flaunt their fearlessness of defying rights asserted by the Beatles, Led Zep, and others. And by presenting the ideas intelligently, cohesively, and in well-shot interviews with thoughtful folks, this is a pretty solid piece of work. It even manages to have a sprinkle of fairness by letting some lawyers explain why they are right and the Copyright Criminals are wrong, by having a not-surprisingly curmudgeonly (in a very pleasant and convincing way) Steve Albini tell us why sampling sucks, and by giving the most screen time to a sample “victim” rather than a sample maker. Of course, Mr. Stubblefield proves to be the perfect protagonist because since he wouldn’t get paid even if his hip hop-ubiquitous drumming samples were legal and paid for (he was working for hire), so he is happy to just get some recognition and would love to just be credited, no checks required. The one problem with the movie involves what it isn’t: the film doesn’t really get into the contemporary legal grey areas that would make it more relevant. It doesn’t discuss contemporary “mixtape” culture where even major label acts are allowed to flaunt copyright law as long as they give the music away free online, it doesn’t get into the pre-Internet mixtape arrest of DJ Drama, and it doesn’t really foreshadow the Youtube/SOPA/Digital Millennium Act brouhahas as much as it should. Which is fine, in that it keeps a tight focus on an era and a method of sampling that allows the film to be a finely honed, very solid piece, but it also makes the movie seem less contemporary than it should be. As far as the record of Mr. Stubblefield drumming: if you’re not gonna remix there’s not much you need a breakbeat record for, BUT if there’s any doubt this record is functional, check out some of the remixes utilizing it on the DVD bonus material. Give that funky drummer some! Some of what, exactly, is the question.
Posted by Roctober Productions at 7:34 AM