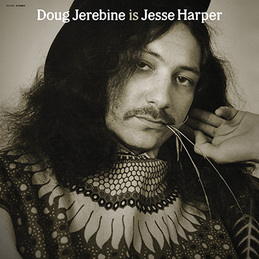 (Drag City) As Drag City continues to drag the audio river for seemingly dead acetates, self-released LPs, flaking reel-to-reels and dusty home recordings, they somehow came up with something genuinely surprising. Jerebine (recording as Jesse Harper) was a New Zealand guitarist in the late 60s who, while weighing whether to become a humble Hare Krishna or an excessive Golden God of rock, recorded this Jimi-esque psychedelic exploration in what at the time was a commercial mode, not cheap sounding and not sacrificing grand wailing for art’s sake. This was supposed to be a major album (and according to the lore, Atlantic almost made it so) and is profoundly unlike hearing some amazing weirdo bedroom tape. This is a band (actually just Jerebine multi-tracked) that was supposed to play after Blue Cheer and before Cream. Yet it is not in any way hampered by its commercial ambitions – because Jerebine is genuinely amazing at ax-ery his playing in never contrived, boringly indulgent, or rote – this is some amazing sounding music. More unique is his singing and lyrics. Because he was pretty committed to a spiritual journey at the time, his expansive mind wanderings, other-dimensional ideas, and big thoughts sound more sincere and real (and complex…”Hole in My Hand” seems to be pretty critical of Christian piousness…and Little Miss Muffet’s commitment to curds and whey) than many of his peers. And his relaxed, slightly odd voice is pretty damn effective. This is an amazing record to either get wasted or to ascend to an astral plane to. And it’s an amazing find that should have come out decades ago.
Posted by Roctober Productions at 5:58 AM