The Icon, The Memoir by Flavor Flav 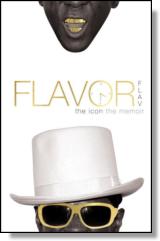 (Farrah Gray Publishing) Like his reality show persona, this book may not actually be that good, and the things FLav says may not be the most pleasant, but something about his personality is so likable that it all kind of works out. The most interesting aspects of this book involve the rather unpleasant reality of Flav’s financial situation and life during the Public Enemy sald days. As soon as he was off tour the money would be gone and he’s be a low level drug dealer, riding his bike. What’s most disappointing is that he never really answers his critics who say his reality TV persona is a throwback to minstrelsy – he says how upset he was that Chris Rock said he should be killed, but never addresses why Rock said it. But in the end, though FAR from a literary classic, you’ll like Flav more after reading this modest memoir.
Posted by Roctober Productions at 7:02 PM