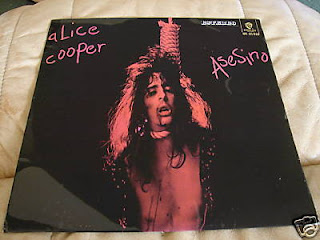 GUEST REVIEW BY GENTLEMAN JOHN BATTLES (Warner Bros Mexico…or is it?) Well I nearly flipped when I found what appeared to be an original Mexican pressing of Alice Cooper's celebrated "Killer " LP...the cover reads "Estereo” and the song titles are in Spanish as well as English. And the title, well, it's just "Killer" en Espanol. It even looks like a much older record so I thought I'd scored big. I soon found out that it's just a new re-pressing. I bought it anyway. I couldn’t tell you if it's a legit release or not but the packaging has a lot to do with it's wide-range appeal. The cover instead of a snake features the classic red-tinted pic of Alice hanging from a noose which was featured in the calendar insert that came with the album upon it's original release in 1972. There is also a calendar inside this release with a badass picture of the entire Alice Cooper Group in gold lamé with drummer Neal Smith holding a boa constrictor over his head (I've read it was Smith who raised the snakes that were used in the band's notorious stage act). This too is a 1972 calendar. You'll want to put it up anyway. Plus the record (sporting the Warner Brothers logo on the label) is on cherry red vinyl.....AND the sound is so good it's...sick. It's an album that demands revisitation. Most fans know great songs like "Under My Wheels" (as close to pure Glam as the band ever got. Alice even threw in a few verses of "Suffragette City" in his live version much later), "Be My Lover," and "Desperado" (seemingly a nod to Eastwood and Peckinpah's ilk but in fact a tribute to their fallen ally Jim Morrisson, a very early supporter of The Alice Cooper Group). But the real standout tracks include "Halo of Flies,” the atmospheric retelling of the James Bond saga (with original situations thrown in) utilizes the band's underrated arrangement skills. That their later "Man With The Golden Gun" was turned down for the James bond movie of the same name co-starring Christopher Lee and Herve Villechaize remains a cold hard slap in the face. "Dead Babies" was a much maligned number but Alice insisted was in fact an anti-child abuse song, and it always sounded that way to me, with its spooky proto-Cramps guitar and moody bass line (Dennis Dunaway for once not sounding like five bassists going at it together -- which is a good thing. He could have held his own with the emerging Fusion scene but WHY?!!). Time hasn’t been kind to "Yeah Yeah Yeah" or "You Drive Me Nervous," though both are as good as anything on "Love it To Death.” The title track is a twisted psychodrama which again could have been used in a film...twin Guitarists Michael Bruce and the late Glen Buxton get in some of their tastiest fretwork here. In the wake of the surviving Alice Cooper's group's plethora of activity it's be nice to see the other early LPs get the same treatment.
Posted by Roctober Productions at 3:17 AM