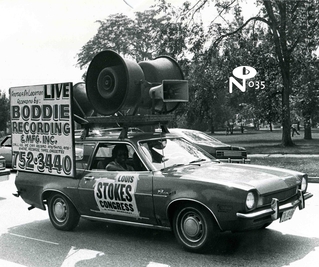 (The Numero Group) Florida is known for its sexual deviance, Californians are flaky, and, of course, Texans are their own species, but for my money, the secret heart of American weirdness has always been Ohio. C’mon: Screamin’ Jay, David Allan Coe, Lux Interior…regular soil doesn’t sprout these kindsa weeds. Further proof is this gloriously beautiful collection of rare recordings, remarkable images, and exhaustively researched, fascinating backstory from this little known black music label/studio/one couple operation from Cleveland. I would never want to use the term “primitive” to describe the works of African Americans, because that term has a history of horrible abuse, but it is fair to say that these lo-fi gems would not pass the muster for demos or work tapes in most studios, yet they sound more interesting than half the platters in your stack. The aspiring, but seriously unpolished, R&B and gospel acts that recorded on Thomas Boddie’s homemade/home-based gear, delivered some very special…and some Ohio-grade bizarre…music. Reverend R. L Hubbard crafted gospel so eerie it genuinely puts the fear of god in you. The Corinthian Singers trump him by singing the most gloriously graphic list of vices ever set to sacred sounds. The recording of A.C Jones and the Atomic Aces has intriguingly strange vocal resonation – perhaps atomic powered. And the Modern Detergent’s “Monkey Hips and Yice” would be a classic based on band and song names alone…and it has to nerve to be as good as promised! Throughout these 59 tracks there are some recurring themes: a low budget to high soul ratio, wah wah-licious blaxploitation/porno guitar, sacred/profane tightrope walking. But there really is only one theme prevailing: Ohio folk ain’t regular!
Posted by Roctober Productions at 11:22 AM