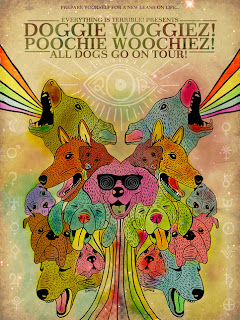 (www.everythingisterrible.com) Though billed as a all-dog remake of Alejandro Jodorowsky’s experimental passion play cult film The Holy Mountain, only the last scene seems to live up that billing (spoiler alert: this film is unspoilable, sucker!). That said, to say that the costumed Cruise-collecting kooks responsible for the Everything is Terrible website have crafted something that moves them several notches closer to Jodorowsky/Herzog/Brakage territory and away from the Found Footage Festival/Lost and Found Video Night/America’s Funniest Home Videos is an understatement. On the shallowest level, they do this by abandoning their mission statement a bit. Their phenomenal site usually mildly tweaks bizarre footage culled from abandoned VHS tapes, exploring absurdity, hypocrisy, and the triumphs of d.i.y. spirit, by spotlighting choice nuggets from lost z-movies, instructional videos, industrial films gone wrong, and religious children’s programming. For this endeavor, unlike their previous two “mondo”-style features, that merely compiled their best discoveries, they have assembled thousands of clips of movies and videos featuring real, computer aided, puppetronic, and “furry’-esque costumed dogs, and this time they don’t discriminate against mainstream, well-known Disney and PBS releases. More shockingly, they even include DVD-era footage that never touched the wicked black tapeworm that wraps around a VHS spool (I’m looking at you Marmaduke!)! And that’s fine, because this 56-minute masterpiece is a genuine, mind-bending, psychedelic, society challenging, culture critiquing, art-achieving experimental film. Although much of the content and execution may seem as whimsical as their regular fare (a dozen dogs tipping their Ray Bans, pooch after pooch on skateboard, a crotch bite montage, talking dogs spewing Rappin’ Granny-Ebonics, dog cops, super dogs, sex dogs, “Going to the dogs” pun after pun), the cumulative effect is something between watching Warhol’s Sleep in one sitting and screening Sante Sangre entirely on fast forward. The hundreds of hours of manpower that went into this will either make you go into an apoplectic rage at the thought of watching the inevitable Santa Buddies 2, or will make you want to write your dissertation on it. Bad to the bone, indeed!
Posted by Roctober Productions at 9:01 PM