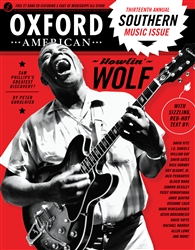 (www.oxfordamerican.org) Music fans who are not aware of this annual treasure, this is the time to figure it out. Oxford American’s music issue has been concentrating on the audio heritage of a particular Southern state for a long while, and this year they finally bit off the biggest chunk of state. While Tennessee may be the heart of the music industry in the Rebel states, because so many writers have adeptly researched and discussed the Country cogs, rockabilly roots, and soul such and such of Nashville and Memphis, the real challenging state is the one where all those soul, country, and rockabillies were born, the one that is so indelibly associated with the blues – a genre which has historically had a lot more awful or lazily racial essentialist writing done about it than any other genre (even rap music has had a better track record, just because so many gifted black writers devoted themselves to its coverage and analysis). Taking on this monumental task, the editors (like a slugger playing minor league ball in the 1040s Cotton State League) hits it out the park. The killer cover story is Peter Guralnick’s love letter to Howlin Wolf that focuses on two vividly recalled amazingly awkward encounters the college-age journalist had with his hero in the 60s. Mixing it up, there’s also a great story on early 80s all-black, all-square peg punk band Men With No IQs, and tons of wacky, yet well-informed Book of Lists-type asides about Mississippi music nuggets. The heart of these issues are always the CDs, featuring a couple of dozen of incredibly curated, cross-genre tracks, each accompanied by a 2-4 page article about the artist/track in the mag. This year’s disc features some of our favorite artists: Bo Diddley, International Sweethearts of Rhythm, Syl Johnson, Travis Wammack, Hayden Thompson, Ruby Andrews, and more, but also some unexpected gems like the Hilltops, the Germans, Harold Dorman, and the regionally accurate, by birth, Charles Wright and the 103rd Street Rhythm Band (they make a good argument in print for including this quintessential L.A. soul man). My only gripe: No Men Without I.Q.s on the disc! This issue straightened out my crooked letters!
Posted by Roctober Productions at 4:57 AM