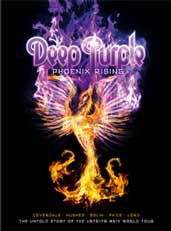 (Eagle Rock) This brief but mighty concert from 1975 sees one of the most fan-fave lineups of Deep Purple destroy Japan with five mighty numbers, culminating is a tsunami-powered version of “Highway Star.” Technically this is extremely impressive, with the vivid colors of the lighting design and great camerawork capturing the energy of the band (the stage lights reflecting in the lens during “Smoke on the Water” rivals the Otis Redding Monterey Pop visual oomph)and musically this is pretty boss, as it’s great to see elusive footage of Tommy Bolin in action. Visually there’s also this amazing contrast because glam-era jumpsuits/flowing scarves and hairy, dirty ROCK aesthetics. Basically, if you can’t dig Purple you don’t love rock, because this is kind of a pure rock injection. The half-hour concert would have been enough, but a full-length documentary about the band during this era leading up to the 1976 breakup is excellent, and an insert booklet with a 28 page 1976 Record World Deep Purple special section reproduced in full is astounding.
Posted by Roctober Productions at 9:30 AM