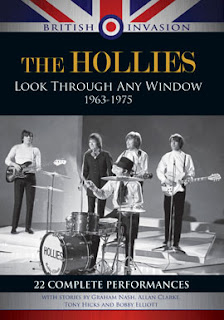 (Eagle Vision) Whenever I see one of those infomercials with Peter Noone, or Smokey Robinson, or Davy Jones promoting some CD box set by showing clip after clip of stars lip-synching of TV shows from the 50s, 60s and 70s, I always think the same thing: if they were selling a DVD of all these clips I’d but that! Fortunately, the folks at Reelin’ In the Years Productions dig what I’m talking about, and they have released many amazing DVDs over the years that present archival video footage from TV shows, or rare concert footage, but their best releases are the documentary style productions (like their amazing Impressions DVD a few years back), that present the stories of the musicians through interviews, but then, unlike a typical documentary, instead of showing a brief clip of the band at each stage if the career, they show full performances from well-known and ultra-obscure sources. Because of the band’s involvement, these are not proper documentaries, rarely offering much critique or analysis: they usually just let the folks tell their own story, and if they leave out Behind the Music drama and tragedy, that’s up to them. Which is a great way to frame stunning footage. This turned out to be one of the most interesting releases in their British Invasion series, because, to me at least, the Hollies story was too convoluted to really fully grasp. I think of them as the early harmony pop group led by (childhood friends) Graham Nash and Allan Clarke, but that doesn’t tell the story of the incongruous collection of post Nash-exit hits “”He Ain’t Heavy, He’s My Brother,” “The Air I Breath,” and “Long Cool Woman.” This collection has four of the principal band members vividly recount their tale, highlighted by live and mimed performances of “Bus Stop,” “On A Carousel,” “Jennifer Eccles,” and their psyche experiment “King Midas in Reverse” (which they were very disappointed to see fail). Live teen performances, irreverent TV show appearances with nutty banter, festival shows, home movies, appearances on the great German Beat Beat Beat and Beat Club shows, and a bunch of guys looking handsome and healthy decades later make this collection a tasty treat. I recommend a infomercial!
Posted by Roctober Productions at 8:38 AM