The Normals “Vacation to Nowhere” 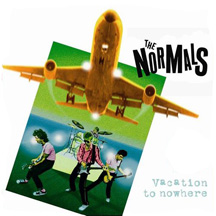 (Last Laugh) I hate to compliment something this good for not being something it ain't, but the fact is that punky power pop in the 90s was terrible for 1000 reasons but mostly because the rich, weary, genuine, powerful singing voice of Joey Ramone was universally replaced with nasal, soulless awfulness. The late 70s/early 80s New Orleans pop punksters The Normals played ballsy, chip-on-the-shoulder rock n roll, with David Normal's manly vocals (which in some ways mimic Joey's slurful inflections the way Brits mimicked American southern talk and Americans mimicked Brits), made more powerful when complimented by fantastic harmonies that were sweet sounding despite the edgy rock. Their records are near impossible to find but to make this package even more valuable it has a 3-D cover (and tiny glasses included) but more importantly a DVD of a killer live 1980 show that shows a band that looks impossibly young while sounding like polished rock vets (though not at the expense of fresh, furious energy). If this pure quality was the punk rock Normal, then punk rock would would rule the world.
Posted by Roctober Productions at 12:00 AM