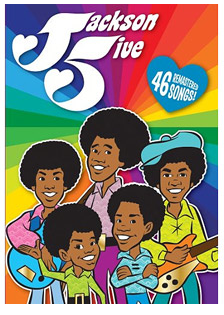 (Classic Media) I love the Jackson 5ive cartoon, and I'm not alone (apparently Michael and his brothers were thrilled to watch it every week, as they didn't know what was going to happen,because they didn't do the voices themselves [though one of the Sylvers did!]). There are a bunch of reasons it's great, not the least of which is that Rankin-Bass (who co-produced it with Motown) was one of the most visually interesting animation houses, and even limited animation is thrilling if the characters look good. Though the Jacksons were not involved in production, the show did feature their fictionalized story, with a glamorous Diana Ross, and a Paul Frees (Boris Badanov)-voiced Berry Gordy discovering the brothers in Gary in the premiere. More importantly, like the Beatles cartoon (and the Osmonds, which was a contemporary of this cartoon) their actual songs were used, and more significantly, the music videos during these montages were killer, at times featuring live action footage of the brothers rocking their young fans. This psychedelic live footage, sometimes with scribbly rotoscopes over the young men, was amazing, and the music sequences also drew upon the innovative animation seen in Sesame Street, Yellow Submarine, and Monty Python.  Though it did not have the educational and pride-building mission and educators' input Fat Albert had, there's a lot of interesting Black is Beautiful content, even if it's not overt (just treating afro hairstyles as normal and cool, even on a robot, for one). On the other hand, they make the Mayor of Gary white, despite the prominence of Richard Hatcher, and the Jackson's rare political content in their songs is toned down (the show illustrates the line "we're marching with signs" with  a collage of Zodiac signs). This program was ultimately a silly cartoon with funny pets, a loud laugh track, and repeating footage, but it was consistently more ambitious than most Hanna-Barbera shows of the time (there's a direct reference to Rashoman in the episode where the brothers tell  a story from different perspectives) and it featured thrilling music, often rare tracks, by one of the best acts ever. This DVD is a treat and a treasure and kids of all ages should dig this as easy as ABC.

Posted by Roctober Productions at 6:13 AM