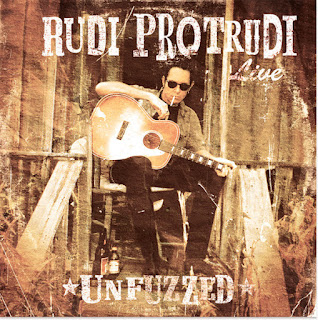 (Hound Gawd, Germany , 2014) I, half-jokingly, told the label that founding Fuzztone, Rudi Protrudi, should play at next year's Bluesfest in Chicago. But, then again, why shouldn't he? Just because he doesn't do 1930's work songs like "Mustang Sally" or primitive Urban Blues, like "Red House?” As Blues Historians agree, if you don't have a ten-minute version of "Sweet Home Chicago" in your set list, you can't be a proper Bluesman. Please. These are the same people who complained after Screamin' Jay Hawkins gave the performance of a lifetime, closing, and setting fire to, the Blues Fest  So, yeah, if you thought John Lee Hooker couldn’t cut it without Bonnie Raitt or Carlos Santana riding shotgun, or that Hound Dog Taylor is the guy who makes those adorable outfits people humiliate their dogs with, then, this probably isn’t for you. Rudi makes no pretension of trying to steal the pure Blues thunder from those who own it, Eric Clapton, Buddy Guy, Robert Cray...Rudi's offers this side project for the same reason he recorded Murder Country classics as Tujunga County's answer to T. Tex Edwards and Iggy Yoakum: because he loves the music, and can bring something new to the table. Keeping it stripped down and to the point probably won't get Rudi booked on too many Blues cruises, but, I think that's a chance he's willing to take...This is neither a Garage Band that made the jump to The Blues (Dirty Wurds , e.g.), nor a cash-in on "The Punk-Blues Explosion" that left Msr. Jeffrey Evans holding the bag. I'm reminded more of the underrated Sky Saxon Blues Band album, right down to the "Seedy" keyboard sound. You will hear a more than credible "Hoochie Coochi Man,” but not the savage, knife-wielding, kicking and gouging, roadhouse staple, "Stormy Monday.".You won't hear John Lee Hooker's "I'm Bad Like Jesse James" sounding any more sinister than you will, here, either, but, then again, if John Lee had attempted to perform the song, himself, at the Blues Fest, they probably would have docked his pay...The sinister, overtly sexual nature of the Blues is a dish best served with a hint of subtlety. Rudi doesn’t have to get his nut on the first number. He can take his time if you can. It's not overly rocked up, nor overtly camped out.  In the noble tradition of White Guys Who Can Work a Good Blues Without Trying to Sound Black (Mose Allison, Keith Relf, Peter Green, Rockin' Johnny, et al.), Protrudi knows the mojo and the hoodoo and the voolah are all subliminal...Because it is in your mind. Check out your mind, or, leave it at home.

Posted by Roctober Productions at 11:04 PM