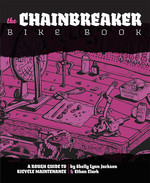 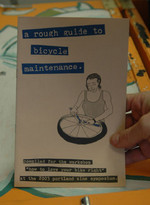 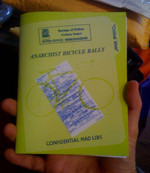 Guest Reviews by John Greenfield) (Microcosm) The Chainbreaker Bike Book is a great DIY guide to bicycle repair and bike culture from two veterans of the grassroots bicycle scene in pre-Katrina New Orleans. The first half of the book is a punk-rock mechanics manual, breaking down the art of bike maintenance to a level that anyone can understand, with a friendly, encouraging voice and charming, hand-drawn illustrations. The second half reproduces all four issues of Jackson’s Chainbreaker zine, the hard copies of which were destroyed during the hurricane. Articles range from a tribute to African-American cycling great
Marshall “Major” Taylor to a hilarious story about delivering friend chicken by cargo bike to Bourbon Street strippers.
In A Rough Guide to Bicycle Maintenance, Jackson provides the essential info you need to keep your bike running – flat fixes, brake adjustments and basic tune-ups – into zine form. This is perfect for those who are just getting started with doing their own wrenching.
Bipedal, by Pedal is a collection of essays and cartoons about the history and significance of the worldwide Critical Mass bicycle protest-parade phenomenon. It is a great primer for anyone who is new to the movement, as well as a nice roll down memory lane for seasoned Massers.
Anarchist Bike Rally / Confidential Mad Libs is a little booklet that provides Critical Mass comedy courtesy of the Portland, OR, Bureau of Police, via the Freedom of Information Act. A collection of police documents dating from 1993 to 2005 keeping tabs on the Rose City’s burgeoning Critical Mass bike ride, it reveals the cops’ growing paranoia that this parade of scruffy two-wheeled activists would “start a riot that would endanger the lives of families and children.” It’s a hilarious read.
Posted by Roctober Productions at 8:49 PM