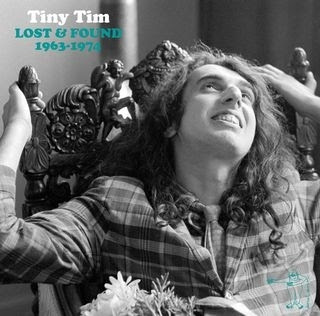 (Secret Seven) (Guest Review by Clara Ware [with optional afterword by Chris Ware])
I love Tiny Tim. He’s my favorite singer. I have all of his songs on my radio. When I first heard him I thought he was a girl because of his high voice. And when I first saw a picture of him I thought he was a girl because of his long hair. But he can sing in all kinds of different voices! He’s a girlish boy and he sings in boy-girl voices and he sends nice messages. My most favorite Tiny Tim song is “My Dreams are Getting Better All the Time,” but my new favorite song is “Me and the Man on the Moon,” which is on this record. 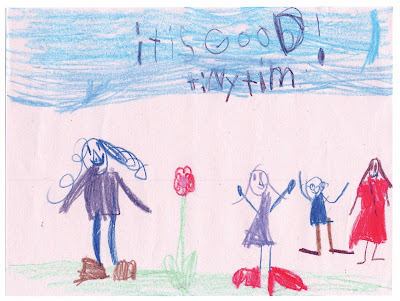 Do you know why Tiny Tim played ukulele? It’s because he started off playing a guitar but then he researched that he could run away faster with a ukulele if somebody was chasing him. He also drank tomato sauce and ate pumpkin seeds. (He would not probably eat them at a restaurant, though maybe he could just order some tomato sauce at a restaurant and at Halloween time when he would carve a pumpkin then he could eat the seeds.) If he was alive now I would give him a huge hug and I would say “I love you!”
Some of the songs on this record are rockin’ and some are jazz-rockin’ and a lot are him playing his ukulele by himself. Some songs are old versions of other songs, like with trumpets going in different tunes than in the later ones. But “I Ain’t Got No Money” — this is the one! Doesn't it sound good? The beginning sounds like daytime. The tune is great. It makes me think of a broken electric guitar. I like to dance to it. “Maggie May” is kind of too slow for me, but it’s still cool, though — he sounds like he's trying to be an old man. My favorite song of all is “Me and The Man in the Moon.” I like it because it's about how people made fun of Tiny Tim, so it's kind of sad and kind of happy. I like how it starts the best, because it sounds like soldiers marching or that song "Those Were the Days my Friend" by that lady. (I like that song, too.) I really think this is the best song on the record.
“On the Old Front Porch” is good but I kind of like the later version better because there are more instruments — this one is just him playing his ukulele. I think “When You and I Were Young, Maggie” is about somebody getting married. It's sad because it also sounds like somebody dying.
If I was going to say something about this record I would say “it’s good!” and I would also say “buy it!”
Thank you! 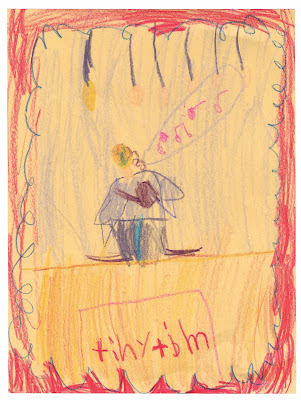 ________
My daughter Clara (six years old as of March 4th, 2011) first became enamored of Tiny Tim (born Herbert Khaury 1932-1996) at age three while on a car trip to Michigan; I happened to have his renditions of “On the Good Ship Lollipop” and “Livin' In The Sunlight, Lovin' In The Moonlight” mixed into a CD of time-passing oddities and she kept asking me to play those songs over and over — and over. She also asked me who was singing and what he looked like and, especially, if we could get more songs by this person. For years my friends Walt Holcombe and David Greenberger had been telling me that as a ragtime record collector I should really look into Tiny Tim — “you’d like him,” they both said — but stubbornly, like a record collector, I resisted. I guess it takes ones own progeny (and a longing for musical variety on car trips) to really be prodded into action, because, well, they were right; after a gradual warming to his music and a concomitant slow accretion of his recorded oeuvre at the insatiable urging of Clara, I’ve come to the not-unique-at-all conclusion that Tiny Tim is one of the most fascinating, if not great, musical recording artists of the 20th century.
Among the first public examples of the “collector” culture that now more or less defines American popular music, he grew up in Washington Heights, spurned for his strange looks and mixed background, losing himself in ragtime recordings of the turn of the century and comic books (sob! My brother!), playing ukulele on the New York subways and in East Village bars until being “discovered,” offered a record contract and rising on the crest of an amazing wave of late-1960s weirdness that crashed him into everyone’s prime-time living rooms, famously culminating in his marriage on “The Tonight Show” in front of tens of millions of eyeballs. But the tide receded quickly, and by the early 1970s he was left broke and divorced, playing ever-smaller venues and circus side-shows into the ‘80s and ‘90s — yet remaining every bit as awkwardly dignified and optimistic as he ever was, right up until the end when he collapsed back stage shortly after singing “Tiptoe Through the Tulips” for one last time.

I have to thank Clara for taking the time to listen and hear what I’d been missing. We’ve since as much of Tiny Tim’s available output as we could, and she’s gotten some of her friends interested, as well (young girls really like this guy!) memorizing probably three-quarters of the recordings: well-known songs, completely obscure songs, great songs and truly awful songs. This new album collects records previously available only to die-hard paleontologists (we’d previously heard most of them on a bootleg CD via the efforts of kind collector Ernie Clark) though the recordings here have been well cleaned and very well curated, spanning Tiny Tim’s interest in popular tunes from the 19th century (“When You and I Were Young, Maggie”) to the ragtime era (“On the Old Front Porch” — this early rendition more exactly imitates the Billy Murray/Ada Jones 78 from 1913) to his multiple attempts at comebacks as exemplified by the sad tune “Me and the Man on the Moon,” which may be YouTubed by contemporary listeners for added pathos. In all of these recordings his gawky earnestness and matronly self-possession come across warmly and clearly, cradling the last tattered threads of self-sung popular song into the harsh environment of the 20th century mainstream music industry, where I think it’s safe to say they’re now being woven back into the fabric of our culture, at least if the increasing interest in early music and homemade performance is any indicator. I should add that Tiny Tim was also never anything but “himself”; any teenager who’s ever listened to some inside voice and decided to change their shoes or their hairstyle or their voice — and now, any teenager who doesn’t do this is actually considered somewhat weird — owes something to Tiny Tim for telling him or her that “it’s okay.” God bless us all, every one. 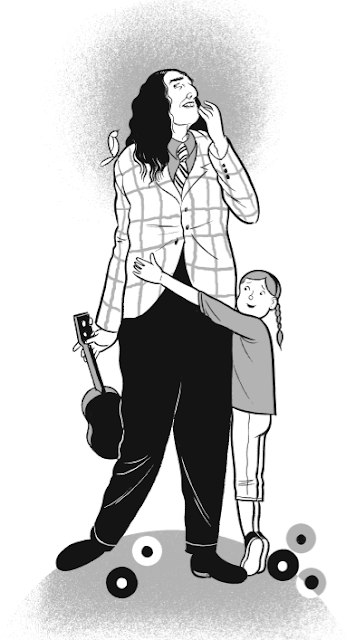 Posted by Roctober Productions at 12:14 PM