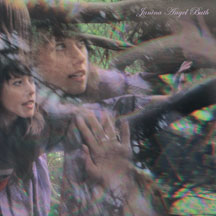 (Prophase) Phreak pholk phlautist Bath delivers 22" of mind expanding psyche/folk/bliss/trance/incantation/majick musick (it's an LP with a 10" hidden in the gatefold like a Crackerjack prize, both pressed in swirly colored-sand-in-a-bottle colored vinyl). While the album(s)'s tracks at times sound more like rituals (or ethnic instrument experimentations) than songs they are never boring, and while deep, droning sounds often dominate this never seems dreary. And I have a theory that explains these seemingly otherworldly anomalies: she actually is an angel.

Posted by Roctober Productions at 11:39 AM