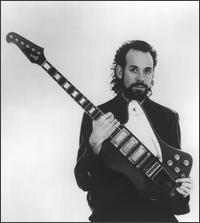 (www.manzanera.com) Manzanera is a guitar hero to many guitarists, but he clearly played with too much elegance and class to become a household name amongst the air guitar-ing lumpen. As Roxy Music's axman, and an Eno collaborator, Phil (a songwriter as well) can take solace in the undeniable fact that he crafted music that had more influence on the new wave/alternative/underground scenes than all the biggest guitar wankers comboned. And he can feel good about getting a nice retrospective box set and archival reissue on the market.  The reissue of his 1975 solo debut (a record I've definitely never seen before) is about half instrumentals, and they are OK, but it wasn't like Phil was lead guitarist in a group with wailing solos, so these are really tracks based on nice rhythm guitar structures that could use a little more embellishment then they get here. The vocal tracks, especially the standout, "Big Day," sung by Eno, are much more satisfying. To be clear, everything on here sounds virtuoso and musically posh, it's just easier to dig the vocal stuff. Though two tracks from "Diamond Head" make the retrospective box, "Big Day" does not, so my brother, you gotta buy both. The first two discs contain 25 career spanning tracks, including cuts he played on Roxy, lotsa interesting solo stuff, and "Needles in the Camel's Eye" from "Here Come the Warm Jets" (which I bet you haven't listened to in ages). It ends with a DVD featuring a documentary on PM that I was too exhausted to watch (after hours of satisfying CD listening), but it also has some cool live and promotional stuff from over the years that I was really feeling. Or should I say Phil-ling

Posted by Roctober Productions at 10:48 AM