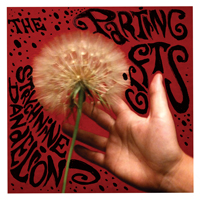 (In the Red) I bought and meant to read that New Bomb Turk dude's book about 90s garage rock, but my kitchen table was uneven, so until I get a proper wedge of wood I'll have to leave that book's spine uncracked. But I naturally assume that his thesis is something along the lines of: "Greg Oblivion had the best fucking singing voice of all those bands, elevating the 53 bands he played with to godly levels, and if you disagree fuck you." There you have it, a one sentence Cliff's Notes! Anyhoo, with this new band or studio project or supergroup or whatever, Greg hides his Memphis slop instincts behind some fantastic Beatles/Byrds-style 60s pop (including a cover of a Jagger/Richards composition), and some of the best stuff has his coarse, subtly soulful pipes playing off of (or moving aside in deference to) the Spector-siren voice of Coco Hames. This record is certainly a fine gift to my parts!

Posted by Roctober Productions at 8:56 AM