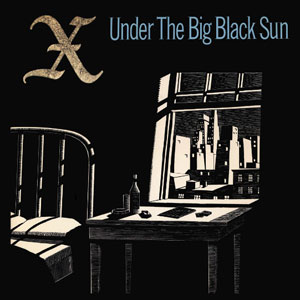 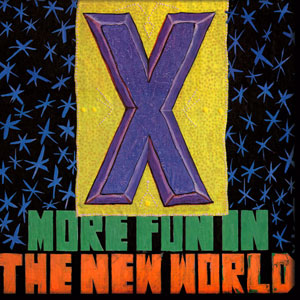 (www.porterhouserecords.com) Porterhouse has recently took up the worthy work of reissuing classic punk albums on heavy vinyl that sounds great (though it looks like the original films for the artwork may have been unavailable as some of the visuals are a bit fuzzy). We asked two of our fave punk enthusiasts to share their thoughts on these L.A. punk treasures.
(Under the Big Black Sun Guest Review by Dom Nation) I remember reading a lot about X but when I finally heard them I was a little underwhelmed. I liked them, and thought they were good but I just wasn't as bowled over by them as the other LA bands at the time (Germs, Black Flag, Dickies). Then Under The Big Black Sun came out and I was sold. I believe my first exposure to the record was seeing the "Hungry Wolf" video on Richard Blade's MV3 music video show (Chicago didn't have cable or MTV in the early 80s, only the inferior ON-TV subscription service). The Bo Diddley-ish beat, killer Rockabilly/Punk hybrid guitar, and the sound of Exene and John Doe's harmonies- the perfect blend of a great song. For some reason John & Exene's vocals don't sound that great to me individually, but together it's heaven.The next tune I "saw" was "Blue Spark" (records were expensive, TV was free!) another unbelievably killer riff from Billy Zoom. But when I play the record today, the tune I always pick first is "Motel Room In My Head." That is the fucking JAM!

I later learned to love Los Angeles & Wild Gift, but Under The Big Black Sun with better tunes, better production, is in my humble opinion, when X hit their spot (rim shot).
(More Fun Guest Review by Chris Butler) I think that I, along with many others at the time (the early 80's), suffered from some kind of punk purity syndrome. It seems that any deviation from a band's established 'sound' or whatever was met with intense criticism. I remember being guilty of this with a number of bands. Like when I saw The Ramones in 1981 after "Pleasant Dreams" had just come out, I thought they were already washed up. When Black Flag put out "My War" and "Slip It In", I remember thinking that they had taken a step sideways, not forward. And the first time I saw X in 1983, on tour to support "More Fun In The New World" I honestly don't remember anything they played other than songs from the first 2, canonically established albums. And what a shame. What had changed so drastically that I would sort of give up on a really fantastic band? I mean, it was the same line up, the same producer they'd used up to this, their fourth record. There were the same cool harmonies between John Doe and Exene. Billy Zoom was still in the band with that fantastic guitar style and sound. I guess they'd cut down on the rage a bit and matured as songwriters, etc. Also, they were on David Letterman's show to promote this record, and they covered "Breathless" for a Hollywood movie. Maybe I thought they were sell outs. Anyway, I'm sure this was the first time a lot of people heard X, and I'm sure it's many people's favorite X record. And I'm sure the next time I see them play, I'll be psyched to hear them play anything off of "More Fun In The New World,"which had some tracks that time has proved prophetic. In the opener "The New World" there are the lyrics "Tears have been falling all over the country's face. It was better before they voted for What's His Name." Jeez, don't let Limbaugh or Beck get a hold of this, they'll say it's about Obama and make it their theme song. Anyway, they are comparing Reagan-era America to the Depression here. They list a travelougue of Rust Belt cities that ends with the awesome chorus of "Don't forget the Motor City, this must be the new world." "I Must Not Think Bad Thoughts" is another song that could easily translate to
contemporary America. It's about the Existential dilemma regarding our personal
complicity in waging wars abroad. Plus they manage to name check The Minutemen, Flesh Eaters, DOA, The Big Boys and Black Flag. Again, another great chorus in this quiet loud quiet, dynamic song.
Posted by Roctober Productions at 4:41 PM