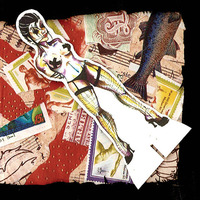 (www.faeriewunderpuss.com) Considering the power and quality of Faerie Wunderpuss' recordings it's pretty amazing they still manage to remain obscure and mysterious in this town. Combining experimental psyche vibes with the slick intensity of industrial music (without any of that genre's ugly or grating-ness), the band (on these ornately packaged one and a half releases) hypnotizes and confuses. Several of the songs feature a woman's striking voice performing spoken word/abstract poetry over stark underground music, which could theoretically be building on the Chicago traditions built by Algebra Suicide and DA, but really isn't. Everything this band does, while certainly quoting, reacting to, and reflecting lotsa specific darkwave/punk/whatever tropes, seems sort of divorced from any specific precedents. Looking forward to more weirdness and art from these pusses.
The Alla side of the split, by the way, is awesome. Way darker and weirder and dronier than any of their relatively jubilant prior releases, and it ends with a killer locked groove that could be used to either torture Guantanamo prisoners or make bees mate!
Posted by Roctober Productions at 7:24 AM