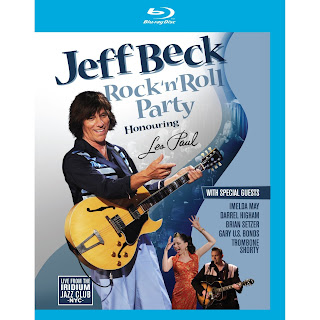 (Eagle Vision) Obviously the first thought when one considers a Rock n Roll Party honoring Les Paul is that it makes about as much sense as a Polka Party honoring Dr. Dre. Sure, I suppose Beck and his crew associate Paul with his guitar designs and recording techniques that revolutionized rock, but anyone who ever bought Les and Mary records, or saw his decades of weekly gigs at Fat Tuesdays or the Iridium (where this was shot) knows he was hardly a rocker. Sure he could hold his own with the fancy solos, as demonstrated in some archival footage in the bonus features of Les and Beck jamming on stage. But Paul's yellow cardigan in that clip is what really reveals how rock n roll he was. That aside, the Less-than-Les material that frames the Paul tribute set here includes some eerie Elvis impersonations from Darrel Higham, guest spots by Gary U.S. Bonds and Brian Setzer, and a killer Julie London bit by Imelda May. The latter is part of a tribute to the soundtrack of The Girl Can't Help It, which cumulatively (it's spread out over the entire show) is longer than the Paul tribute, and peaks with a Treniers number. As far as the several song Les and Mary bit, May is fantastic, singing along with pre-recorded self-harmonies and finding those perfect enchanting notes. This DVD generally looks fantastic and is a lot of fun. And it has me on the edge of my seat awaiting the Klezmer Coffee Klatch honoring Katy Perry.

Posted by Roctober Productions at 2:28 AM