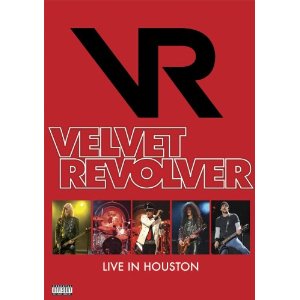 (Eagle Vision) In this concert film (with interspersed interview tidbits with the band and a not particularly articulate hot Nazi chick) we hear the dudes tell the audience that people in the industry told them they'd never make it. I actually recall thinking something a little different -- skepticism that a band made up of three burned out members of one of the most volatile bands in rock history (Slash, Duff and Matt Sorum from Guns 'n' Roses) and the barely recovering/just jailed vocalist of Stone Temple Pilots would be able to stay together long. In fact they pulled off a solid five years, half a Beatles career, so I was wrong. But if I thought they were going to be super awesome or more than the sum of their parts, I was wrong about that too, as evidenced by this exquisitely shot and whimsically edited (lotsa split camera/reverse shot/goofy fx stuff) video. I definitely heard all the VR songs back in their heyday but the only tunes I really recognized more than vaguely here were the GnR and STP covers. And while everyone is totally delivering the goods, Scott Weiland's rock star arrogance and desperate, weary eyes just don't match up. There are a few highlights however. one is Slash totally playing to the Texas crowd with gloriously pandering banter, and the other is Duff explaining how they cleaned Weiland off drugs with mysterious martial arts training.

Posted by Roctober Productions at 2:11 AM