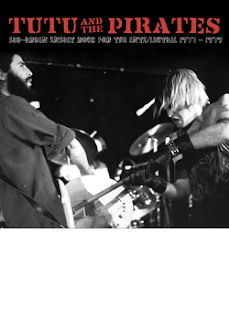 (Factory 25) Had they ever released anything Tutu and the Pirates would undoubtedly be considered not only one of the pioneers of Chicago punk, but also one of the most gloriously absurd, totally fucked up bands in this city's long absurd fucked up musical history. But because the ridiculous rockers, who utilized plumbing tools, porno, and mountain man beards as props, and sang about serial killers, child killers, zombies, sadism, rats, Freud, and pimples, were such a popular live act that they couldn't conceive of not being signed, and never self-released any of their fine 70s recordings. Thus they were an unjustly forgotten band. After being featured in the Chicago punk documentary You Weren't There the band not only began playing reunion shows but also agreed to release their glorious archival material. Certainly a band this ridiculous made music that can be considered novelty punk, but what punk can;t be considered novelty punk? Describing the music, lyrics, and impact of these songs feels like trying to explain a joke, so I will simply say that if you have any interest in punk history, or just have a sick sense of humor, you should seek this out.

Posted by Roctober Productions at 12:01 PM